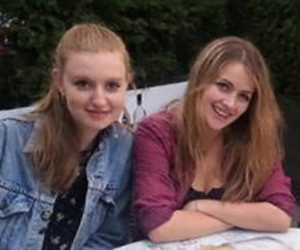 As the battle over the future of Obamacare returns in the United States, the United Kingdom’s National Health Service is often held up as a more enlightened approach to providing healthcare.

So it might come as a surprise to learn that the NHS pays for 40% of so-called conversion therapy sought for LGBTQ people in the UK. It was certainly a surprise for two queer students at Oxford University – such a sad and disappointing surprise that they decided to challenge this discredited practice through an appeal to Parliament and a public awareness campaign to build public support to end conversion therapy inside and outside the NHS.

Celine O’Donovan and Amelia Brown met at Oxford where Celine is studying law, and Amelia just completed her degree in English. They became aware of the issue when “A mutual friend of ours came out to her parents last summer and was met with the threat of conversion therapy. We were comforted only by the fact that all of us thought that surely, in this day and age, this threat could only be empty. However, we took to Google and were shocked to find out that conversion therapy is legal and happening here.” says Amelia.

“Not an Illness” is the name of their effort which includes a promotional video “depicting an instance of conversion therapy and what an interaction between a doctor and a patient might look like,” explains Amelia. “A lot of the therapy used today is trauma based. It assumes that for a person to be LGBTQ something awful must have happened to them as a child. Such therapy can create false memories of a traumatizing childhood experience to ‘explain’ a patient’s homosexuality. We believe that the main problem with this issue is a lack of awareness about the fact that this kind of therapy is still available today. We hope that this video and our campaign will have a broad appeal to anyone who believes in equality and the rights of LGBTQ people.”

“Not an Illness” promotional video

One measure of success will be the number of signatures on their petition to parliament. But, for Celine, the “the real mark of success will be how people respond. For me, I’ll know that the campaign has built the power for change when I talk about legal U.K. LGBTQ conversion therapy and people are already aware that it’s happening. There is lots of excellent work being done at higher levels by pressure groups to lobby government bodies, but as a grassroots movement our power lies in the awareness that we raise.”

“The audience for ‘Not an Illness’ is anyone who’s LBGTQ or an Ally and doesn’t already know about UK LGBTQ conversion therapy. There is a major lack of support for the issue in this country, but it comes from the fact that people simply aren’t aware that it’s happening. We’re hoping that ‘Not An Illness’ can change that.”

The success of the project can be followed by visiting the petition page, sharing their upcoming video and talking with friends and family about this abuse of LGBTQ people, often at taxpayer expense.

As the legality of same-sex marriage gets approval in Latin America’s Chile, the 31st such country in the world, the... END_OF_DOCUMENT_TOKEN_TO_BE_REPLACED

The bill has been pushed by the conservative Life and Family Foundation, which recently lobbied successfully for a restriction on... END_OF_DOCUMENT_TOKEN_TO_BE_REPLACED

A prominent LGBTQ activist in Tunisia has reported that two men, one dressed in police uniform, threw him to the... END_OF_DOCUMENT_TOKEN_TO_BE_REPLACED

Constitutional scholars in the US said a litany of rights, from same-sex marriage and sex to birth control and in... END_OF_DOCUMENT_TOKEN_TO_BE_REPLACED